With Walt Disney revisiting the classic tale of eternal childhood, magical fairies, and peg-legged pirates, a video game version of the sequel is surely in order. Play as Tinkerbell or Peter in this sweeping epic that spans 20 gigantic levels. Each stage is filled with physical challenges, tough puzzles, and plenty of enemy characters. The story is true to the original children’s books and the Disney version of the epic story. Taking place during World War II, the narrative picks up with Wendy as a grown woman, trying to raise children of her own. Her daughter, Jane, has been affected greatly by the battle unfolding throughout the world, and has denounced all belief in the magic that Wendy has taught her of. That all changes, of however, when the young girl is kidnapped by old Captain Hook and his goons, prompting Peter Pan and Tinkerbell to swing into action. This challenging game is designed to appeal to players of all skill levels. 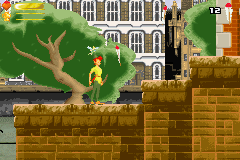