Our hero - a student named Ranmaru - yesterday was transferred to a new school (like the university, but it is called a school). Transferred it there "for pull." We first see his delusional dreams, then he himself tells us that this is due to the fact that in his childhood, he nearly died from a strange disease. Even his uncle - the director of the school, which moved him "to pull" Ranmaru asks investigate what caused the epidemic is cold (or a human, I'm not up to the end of kerf). In the general, normal. And you might just foretell that there will be more. Love and not just with the girls of this school. Ha, I think so too. But it is not so simple. In this school are not just an accident, but something worse, something mystical. And our student затянут is in the strange events. So not everything is so simple - a simple game turns into detective thriller, and then just in horror. Our character ... No, I will not say - as you play will be uninteresting.

Well, okay, tell little about the game. First, the authors tried to make it possible to play without mysha. With convenient. Secondly, in the game (somewhere in the middle of the first day) you can walk on the map, and painted by hand, which adds to reality. The third is in the game (as has been said) a very good graphics, sometimes very close in quality to the three-dimensional. And plus to this good music, and voices and sounds. You can also quickly scroll through an unnecessary waste (some talking). Gallery of pictures executed in the most convenient way to all the games are familiar to me. This is the first game (can not last, but others I have not seen), in which the gallery of images made with the preview. The game completely unpredictable events (although I had thought that playing with the interface can not be a simple X-Story). And, besides, the character depends on the behaviour of the finals (total of five). And plus the whole, when the game be over, opens 8 "bonus" pictures.

But the most important - in this game there are several places where you can influence the course of events. In short, there is two ways - "f801" and "f701" (so-called authors, it is unclear why). So, which way you go, determine a few control points. For example, would you "spy" (again, why "spy", why not just "peep". Another oddity ...) for dealing with the love of the characters. And also a few neutral places - for example at the beginning of the game (during the day) you can either go to the "Ishii Hall 2nd Floor" meet and Haruka (f701), or go to the roof and meet Shotaro. But in the rest of the way "f701" - a way to "hentayschika, and it is most hentaynyh scenes. (after 6 of the control points further selection will be made based on what path you followed), but the way "f801" worth trying just for the other two endings. Places where you can choose, with 6 (although the authors say, and 7. Another bug), and if you do not go strictly by "f801", to have ever choose another path, but the f701 choose less than 4 times you get "dead ending". So, decide in advance, to have or not have. Alternative ending credits quite strange question - whether you leave your body ... Behold now, until such normal school life.

I purposely do not want to talk about all during the game, that was interesting in its play. I will say only that you will find a lot of magic, ghosts... and gallons of blood into the bargain.

Life has been rough for Ranmaru Hibikiya. Bedridden as a child with a mysterious illness, he's had to spend most of his time alone, drugged, wondering if he would live to adulthood. Now, however, things are getting better for him. His health has improved; he only experiences the occasional seizure. Also, he's been enrolled in his uncle's distinguished institution,
the Asao Private School.

Of course, this fortuitous turn isn't without a catch. His uncle, a rather mysterious man, installed Ranmaru at Asao to serve as his spy. Ranmaru begins an innocuous investigation, not really expecting to find anything important. Soon, however, he finds himself immersed in horrifying, supernatural events that could claim his life at any moment.

Divi-Dead is a menu-driven adventure game. You control Ranmaru's movements as he investigates the campus of the school. The places you visit drive the unfolding of the story and at certain key points directly affect Ranmaru's fate. Pay attention! Every detail is important in piecing together this mysterious tale. 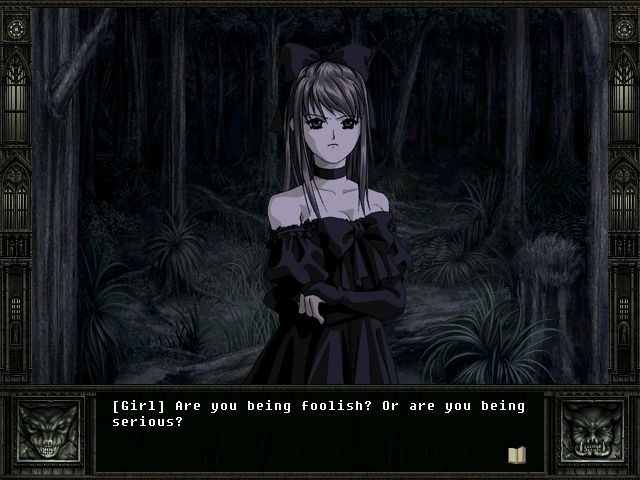 View the full gallery (9 are NSFW)