We have a true RPG. That is to say "we" - this is a great warrior planet Hentai, which has everything to be great - weapons, armor, hit points, Mana Point, Expo, levely and all. There are, respectively, the magic, but I'm up to it had not yet reached. There are also various monsters - slug, minotaurs, Dwarves, wolves, demons and so forth. There is a city of traders, shops, quests. There is a huge world, which you can walk. So it indefinitely. Two words, as I said, the true RPG.
But you probably just say: And that, M & M that you are not true RPGs? A Diablo 2? And Morrowind? I say - yes, this is also a good RPG. You say - so why play such game with fair graphics when you can play in the beautiful Diablo, or simply the beautiful Morrowind? And I will tell you that the game play is not for graphics, and the game with good graphics, has all chances to become a sludge. The thing is gameplay. And in this game it is not less than Diablo or Morrovind. I am going to detail what I mean.

Good balance of power, and thought - if the Morrowind / M & M and others. sometimes occur a situation where the monsters just can not get you, and you boldly stand and cut a hundred bastards, then in this game 7 loshkov small debris can one fat hero. And this I believe is correct. Of course, 7 slug never rubble 40-level character, but if you beat the three Dwarfs just then beat 5 Dwarfs by an order of magnitude more difficult. A strike of two magicians instead - general ass. Because - in this ancient game has monsters play in the team. That is part of blocking the player, and protected, and with long positions in a fly fayerboly, Lightning, and other crap. By then - in this game the monsters can be treated - beaten monster makes a step back, and while his comrades are protected, caste treatment. So it all out. And most importantly - you can battle "study" of monsters, in this mode, each battle will improve your chances to face pogantsu and stay alive.

And that is why I am so glad to learn of the existence of this game. Why is a girl who gives you a quest, is obliged to pay only in cash. And so it is in all other games. In the same there are some girls (but only for as long as I am "Snow White" and "Little Red Riding Hood" came, but I hope this is not the limit), which may pay "in kind". Sometimes it is necessary to save the girls from the hands of arrogant creeping thing, which is also trying to outrage over them. That was - and is an missing part, which is missing in many games to become "real." After all, in the RPG should be possible to make the best action possible in the real world.

ported to
Dragon Knight III (3DO)
Knights of Xentar (Windows) 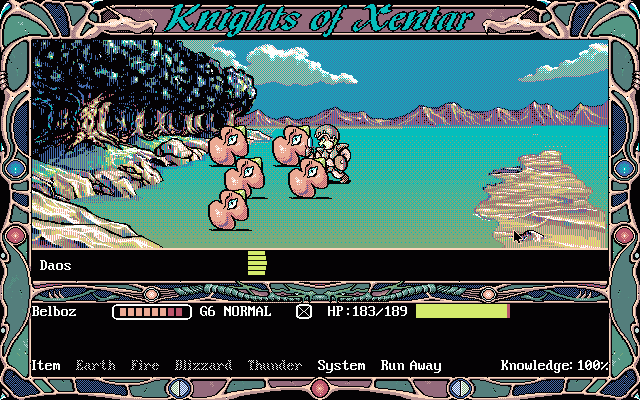