It starts simply enough. On your wedding day, your bride-to-be is captured by a rival kingdom, and you set off on a quest to get her back. However, once you do save her, you discover the truth - that she is in reality the princess of this rival kingdom! At this point, the game offers you a choice: You may choose to marry either her, or one of your companions from your own homeland. The decision you make here will affect the way the rest of the game unfolds. Though considered by many the weakest game in the series, PS III deserves note for its unique plot development, which unfolds over the course of three generations. With four different endings depending on who you choose to marry, there's plenty of replay value.

Vanquish the Dark Forces
It's been a millennium since Laya's hordes battled Orakio's cyborg armies. And civilized man was almost destroyed. But the Dark Forces still remain. Conquer these monstrous mutations. Fight them with swords, knives, bows - even your wits. You live and die by them.
Explore the Planet and Beyond Trek through 7 distant lands - some friendly, some not. Transform into an aerojet and fly over snow-capped mountains. Or become a submersible or aquaskimmer and cross vast oceans and raging rivers. Then find and fight your way through danger-laden dungeons.
Come Forth Now Embark on a journey so vast, it spans the lives of three generations. Begin with Maia, spirited away by a winged dragon on your wedding day. Experience one of our four endings that will surprise new and former Phantasy Star players alike.

# 2017-06-17 17:17:52 - official description
As Rhys, the crown prince of the Orakian kingdom of Landen, you are engaged to be married to Maia, a woman from a rival kingdom. But Maia is kidnapped on your wedding day, setting you on a quest filled with twists and turns that will reintroduce you to people and places from previous Phantasy Star games. This epic spans several generations of characters, and your choices will dramatically impact the way the story unfolds, which makes it a great game to play all the way through more than once. In Phantasy Star III, things aren't always what they seem-check it out and watch the mysteries unfold. 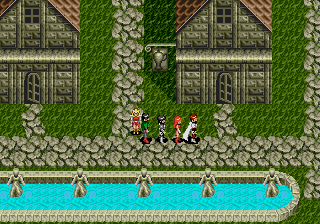