Phantasy Star IV: The End of the Millenium

The fourth game in the Phantasy Star series. This game shows the influence of Final Fantasy's success; there is more emphasis on plot and character than in previous PS games (which tended to focus more on mazes and search-and-destroy missions). Contains numerous references to all previous Phantasy Stars, including a scene near the end where the lead character is contacted by the spirit of Alis, the heroine of the very first game. Many mysteries of the Algo system are revealed here, giving this game a true sense of closure for the series. Highly recommended for all RPG fans, but especially those who've played the other games in the series. 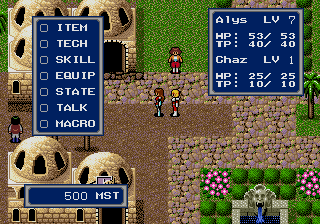 Phantasy Star IV: The End of the Millenium in-game screen.