Quoted from anonymous:
Gold edition has two extra levels: 'The Shadow of the Cat' and 'Unfinished Business'.

Sanguine # 2011-04-02 15:06:44
Lara Croft is employed by Jacqueline Natla ,to find an artifact rumored to be
hidden in a temple in Peru. When she finds it she realizes that it is one of the 3 parts of a more important artifact, the Scion,which is the key to activating the Great Pyramid of Atlantis. She also discovers though, that Natla, her employer is not what she seemed to be.
She was one of the 3 rulers of Atlantis and she had one of the 3 pieces of the artifact. The other two belonged to Tihocan and Qualopeg. However, she abused its powers, creating a race of monsters which destroyed Atlantis. The other 2 rulers froze her into what they thought would be an eternal prison. She, however, managed to escape and now wants to create mutated species again. Lara has to stop her, but that's quite difficult, because she is both powerful and intelligent.
Lara now needs to find all the three pieces of Scion, race against Natla's henchmen and then go to Atlantis for the final battle.

DOS version package prominently advertises that it runs under windows95 and it does. But it is a native DOS game with a native DOS installer. 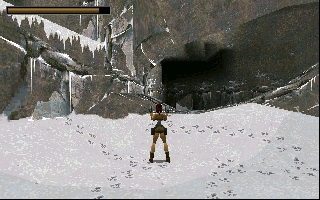