Every successful military campaign requires control over the skies. Army Men Air Attack gives our toy heroes command of a helicopter squadron with Apaches, Super Stallions, Chinooks and Hueys. Jump onboard as these plastic choppers dominate the skies.

# 2015-04-25 18:46:18 - official description
"Toy Soldiers Take to The Skies. Pilot one of four helicopters through the treacherous terrain of the backyard, picnic areas, and nearby beaches. Engage in Air-to-Air and Air-to-Ground combat with enemies ranging from battleships to butterflies. Utilize the unique abilities of each airship to capture giant Teddy Bears, blow up sand castles, and save Sarge from being melted by kids with a magnifying glass." Army Men Air Attack features 4 different helicopters armed with an arsenal of pyrotechnic weaponry. Team up in the split-screen cooperative mode or battle head-to-head in the competitive two-player mode. 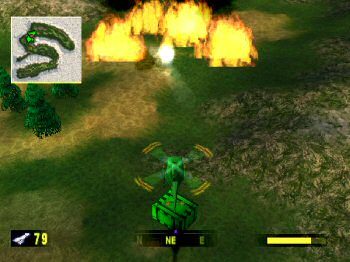