Boba Fett's father, Jango Fett, stars in this dedicated STAR WARS epic, which takes place between Episodes I and II. Flying from place to place with his jetpack, Fett will travel across six worlds in search of a venomous cult leader. Employ such weaponry as a flamethrower, wrist missiles, and dual blasters as you try to conquer 18 massive levels. Though the game is designed to appeal to STAR WARS aficionados, the control scheme is easy to pick up and the story isn't too complex for the casual fan to get into.

# 2015-04-29 17:39:22 - official description
You are Jango Fett, the galaxy's most dangerous bounty hunter, hired to hunt down the elusive leader of a mysterious cult- dead or alive. Through 18 action-packed levels across six diverse worlds, face off against galactic scum, fearsome beasts, and brutal competition that stands between you and your prey: a deranged dark Jedi. This hunt will lead you to the darkest corners of the Star Wars universe where no one else has dared to go, but you are the fearless, ruthless, and relentless Jango Fett. For the galaxy's most wanted, there is no place to hide. 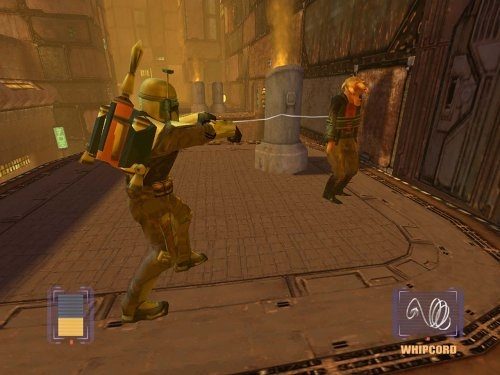