a.k.a. Marvel's The Invincible Iron Man

Another popular game of Marvel Comics hero is here in this GBA game to do battle against the likes of Blizzard and Crimson Dynamo. You play as IRON MAN as you chase and track down villains who stole your battle suite suit technology. This game is loaded with action, adventures, and multiple power ups with varieties of battle suite weaponry that will allow you to defeat your villains and Conquer the many levels of dangers with the ultimate IRON MAN experience.

# 2013-07-24 15:10:29 - official description
It's not just a suit -- it's a weapon
You are Anthony Stark, inventor and businessman. After a near-fatal injury due to an act of industrial sabotage, you designed a life sustaining shell made of high tech armor-a suit that allows you to become the Invincible Iron Man. However, now the suit has fallen into the hands of evil. Wearing an alternate suit, you must battle Blizzard, Crimson Dynamo and other malicious foes in an attempt to retrieve what is rightfully yours. With diverse environments, multiple power-ups and unlockable bonuses, Marvel's The Invincible Iron Man is the ultimate experience for fans of Marvel Comics' Golden Avenger.
Can you recover your stolen battlesuit before it's too late?

* Tangle with foes across 4 spectacular locations including the docks, deep Dark forest, alpine snow and the industrial research tower.
* Use repulsor beams, boot jets Uni beams and flying shoulder charges to reclaim your suit and take down your enemies. 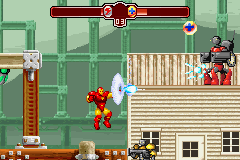