Backyard Wrestling: Don't Try This At Home is based on the best-selling Backyard Wrestling video series that has become a worldwide phenomenon. Chaos ensues as gamers break free of the restrictive ring and non-immersive environments traditionally offered in the genre. This will be the most outrageous, extreme and over-the-top wrestling and action game on the market. The fully interactive environments let GAMERS re-arrange a lot more than their opponent's face. Over 30 playable characters including Mdogg 20, Josh Prohibition, Mad Man Pondo, The Rudeboy, Sabu, Insane Clown Posse, and the babes of Backyard Wrestling. Innovative damage model system allows the characters to get cuts, bruises, and gashes all over their bodies.

version of
Backyard Wrestling: Don't Try This at Home (PS2) 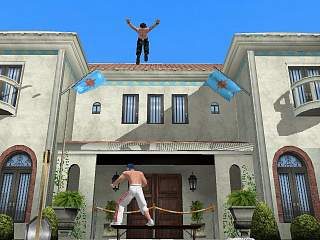