Dino Crisis 3 begins with the discovery of the gigantic spaceship "Ozymandius" that has suddenly re-emerged after disappearing for 300 years and is now headed towards earth. You assume the role of Patrick or Sonya, members of an intergalactic marine group called SOAR (Special Operations And Reconnaissance), who are sent by the government to investigate and procure any possible survivors aboard the outpost. As Patrick and the agents infiltrate the spaceship, they come upon a horrific scene of ravenous dinosaurs inhabiting the spaceship. Now it's a life and death struggle against massive beasts as they float through the dark recesses of space. Despite this unnerving situation, they must cautiously proceed with their mission to find out the mysteries of the colony ship and stop it from returning to Earth.

# 2013-08-16 17:16:11 - official description
You and your partners are on a search-and-rescue mission to piece together the Ozymandius spacecraft's mysterious re-appearance after a 300-year absence. Armed with hyper-speed booster units and an arsenal of futuristic weaponry, confront ferocious space mutants and evolved forms of dinosaur creations in your quest to solve the mystery. 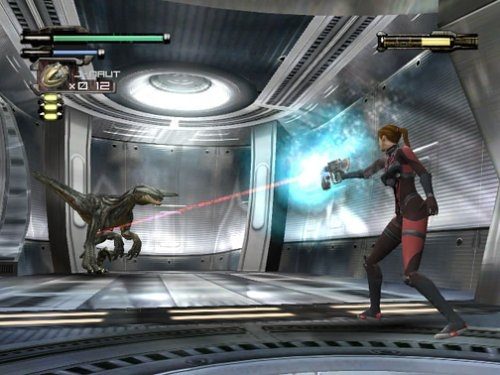