As the long journey through space concluded, the spaceship Monotros was returning home unscathed. The tired crew was anxious to return to their mother star, Volfied!
But... an unknown alien force had already been there. Shocked and confused, the Monotros crew saw Volfied had been completely annihilated. A life scan of the mother star indicated that the entire population had been terminated!
A desperate Monotros crew orbited Volfied for a final time. Suddenly a glimmer of hope emerged. An S.O.S. signal was being transmitted from deep below the surface where the aliens now reigned. There are survivors!
Red Alert! Red Alert! Report to battle stations! Monotros engages the alien aggressors in a desperate attempt to save their mother star! The future of Volfied rests in the hands of Monotros. Activate the rescue mission! 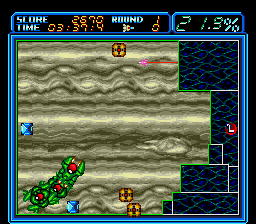