Gemini Wing is a shooter with many extra weapons. Your enemies are not war planes or spaceships but horrible creatures in a fantasy world. The game is not bad but too chaotic, the background and the enemies are both yellow, so it's quite difficult to differ between them.

Simple really - as the Gemini Wing pilot training manual says, it's just like playing an arcade game. Press the fire button and deal out laser death.
But there's more. A strange paradox in the fabric of reality causes additional weapon systems in your fighter to materialise when you blast certain aliens. Small clawed creatures cause a single gunball to materialise when they turn up their claws and cough their last, while porky fat clawed aliens - known as 'Bringers' - can yield as many as eight gunballs in their death warps.
"Collect up gunballs whenever possible and then use them by pressing and holding fire to help you do the job of dealing death to the mutant alien scum" is what it says in the Gemini Wing pilot training manual, and the guy who wrote it got it right. (There is a third, undocumented method of acquiring gunballs that he doesn't mention, but that involves stealing) 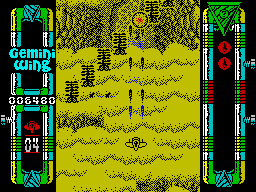