"Esper Boukentai" is a quite unusual platform game. First of all it has some typical RPG elements like gathering xp from killing monsters (with a giant hammer) thus leveling up and increasing stats like speed, attack or jumping power. The game consists of one big level which has many rooms connected by doors which must be opened by touching colored idols. Some rooms can only be entered with certain items (like a gas mask) or by using special abilities from some friends which you can switch to once you rescued them. Mapping in the game is needed since the layout is quite complicated. Also, this must be the game with the most insane super jumping I have ever played. Once you reached higher levels and with the correct character you can jump literally a dozen screens high.
The game is decent, but not good enough to be called a classic. 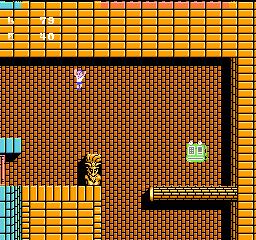