Shining Force 3, set in an ancient civilisation where battles between Good and Evil were commonplace. You and your party face many battles along the way, you'll need both brawn and brain in equal measures if you wish to succeed in this quest. A truly Epic game featuring sensational battle scenes. Traverse across vast lands with full 360 degrees movement, enter lush towns where you'll be able to upgrade your arsenal of weaponry and meet potential party members. You'll also meet a host of interesting characters along the way, some friendly and others not so. With over 50+ hours of gameplay Shining Force 3 is one of the biggest Saturn RPG's to date.

The plot of Shining Force III revolves around a conflict between the Republic of Aspinia and the Destonian Empire. At a peace comference, the Republic leader, Benetram, appears to kidnap Domaric, the Destonian Emperor, which leads to the outbreak of war. However, not all is as it seems...

In Scenario 1, you play the role of Synbios, a Republican general who must discover who is behind the war and protect the Republic from betrayal and invasion...

rpgfans.com say:
Shining Force III is a game that has managed to attract a large amount of attention ever since it was announced for the Sega Saturn. Not only has it turned out to be one of the greatest strategy-RPGs ever created, it was one of very few games that was released in successive multiple chapters (SFIII was released in three interconnected scenarios roughly 6 months apart). To add fuel to the fire, Sega of Japan announced that a special gift would be sent to everyone who had bought all three scenarios of SFIII. This gift turned out to be the fantastic Shining Force III Premium Disc. 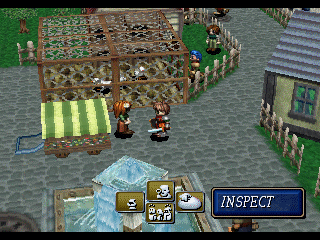