Not at all connected to the UN-'superified' Wrestlemania Arcade. Thank goodness.

(Garrett) - # 2006
Another WWF-licensed wrestling game, featuring the likes of The Ultimate Warrior, Ted DiBiase, and Papa Shango, among others. Each character has his own signature move that can be done at any time. Aside from the standard one-on-one fight, you can also set up tag matches or Survivor Series-style matches (i.e., teams of four). Unfortunately, in terms of gameplay, graphics, and sound, there's nothing 'super' about this one. 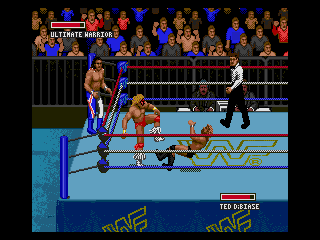