a.k.a. Zool: Ninja of the 'Nth' Dimension

The computer-versions were released by Gremlin Graphics. EA released the european MD version and GameTek released the american Genesis one.

In Zool you play the part of the Interstellar Cosmos Dweller from the Nth dimension. The Nth dimension isn't one specific place; it is everywhere. It is imagination and Zool is its guardian, Protector of Creative Thought and Defender of Positive Action.

You must take Zool to the edges of the known universe and beyond, guiding our hero through seven worlds, back to his home, the Nth dimension. It may sound easy but these are places I wouldn't want to walk though on my own at night.

Krool and his assistant Mental Black have been real busy here. Together, they have gathered the forces of non-imagination turning ordinary objects into deadly assassins. You'll certainly need to develop your Zooling skills to overcome these and the other challenges awaiting.

Explore the levels, despatch as many Krool's Legionaries as you can, pick up the bonuses, find the exit and defeat the end of level beastie (oh, and don't forget to keep an eye on the clock)!

Easy, huh? Don't worry you'll soon get the hang of Zool and there are many items to help you. This is going to be one journey you'll never forget. It's going to be, well...WEIRD!

port of
Zool: Ninja of the 'Nth' Dimension (Amiga) 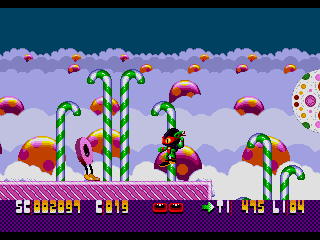