The Saga Continues... The war for Planet Zi rages on and a hero emerges to lead a dangerous mission. To succeed, he must team up with Bit and Vam. Help them use the full power of the ZOIDS to bring peace to their world. * Join over 70 charactersn* Battle over 140 types of ZOIDSn* Create and upgrade ZOIDS to perform combination attacksn* Customize battle conditions through 10 levelsn

Zoids: Legacy is the English version of Zoids Saga II, and one of my favorite RPGs for the GameBoy Advance.

A massive spacetime distortion merges the timelines of the first three anime with Zoids VS, Silver Liger Zero, and the events immediately following Zoids Saga.

Needless to say, this is not a good thing.

The player, a Saberlion-driving mercenary in his own timeline, is thrust into the role of a Zoids Warrior, a gladiator of sorts who drives Zoids as a sports event. As he battles his way around the bent world, he becomes embroiled in a struggle against a shadowy organization known as Terra Geist, which seeks to rule a world that shouldn't even exist in the first place.

A total of 151 Zoids types are available, including the ever-popular Ligers and Liger Zeros.

My only real peeve is that the English translation is rather poor, making for maddeningly numerous typos, and oddities in the characters' combat speech.

Nevertheless, it is a very good game. I wouldn't mind if it was re-released with the translation done correctly this time. 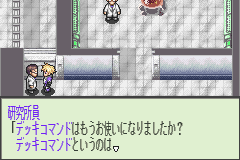