Yes, the game looks spectacular... at first. The characters are very large and detailed. But too bad that the movements are not very fluent. Gameplay consists of fighting your way through myriads of enemies (which lack in variety). I think this game was some kind of early 'graphics over gameplay' game, with the main purpose of showing the superior graphics of a PC-Engine in contrast to other 8-bit systems of that time.

China Warrior is a side-scrolling action game that was released around the same time as the TurboGrafx16 in Japan. It's up to the kung fu master Wang to defeat the Dark Emperor, who stands atop the kung fu world in China. Punch, kick and jump-kick enemies along the path that lies between you and the three bosses of each stage. Skillfully fight your way through all four stages, and be sure not to miss recovery items while dodging enemy attacks. China Warrior boasts character size and detail that rivaled all other games at the time of its release. Exciting one-on-one fights against the game's realistic bosses will make you feel like you're in the middle of a kung fu movie. 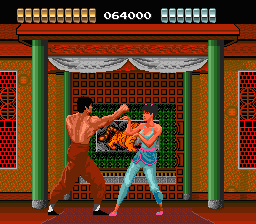