Strange enough this game never made it outside of Japan, but maybe that is for the better because the game is not really good. Strange controls and graphics that are not on par with other PC-Engine games. The gameplay resembles that of Road Blasters. Besides getting to the goal in the given amount of time, you have to shoot other cars which are in your way and avoid their shots or attacks from airplanes. After each of the six stages there is a little boss battle. Noteworthy is the ridiculous Japanese voice of K.I.T.T. in the few cutscenes between the stages. 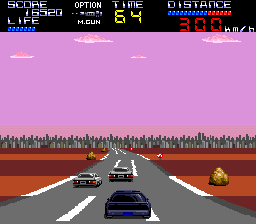