Strongest point of 'Power League' is the fast and accurate gameplay. It's one of the few early baseball games that I really liked. I missed a real league mode though. The game spawned several sequels.

Acclaimed for its steady game play, World Class Baseball is the definitive baseball game on the TurboGrafx16. Battle the computer in OPEN MODE or play a friend in VERSUS MODE. Customize your team in EDIT MODE or even watch a game between two computer opponents in WATCH MODE. World Class Baseball offers the complete baseball gaming experience. Of course there's also plenty of single-player action. The main feature is PENNANT MODE, where the player chooses a team from one of the world's leagues and strives to win their team's league. Beat league rivals and save your progress with passwords on your way to becoming league champions. After winning your league, get ready to the face the other league's champion in the heated series for the world championship. 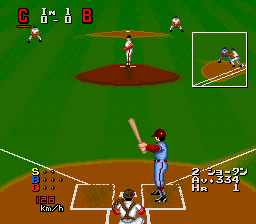