Adventurer Lara Croft has been hired to recover the pieces of an ancient artifact known as the Scion. With her fearless acrobatic style, she runs, jumps, swims and climbs her way toward the truth of its origins and powers leaving only a trail of empty tombs and gun-cartridges in her wake.

- Gameplay faithful to the original award-winning Tomb Raider adventure
- Unparalleled 3D graphics
- 16 massive action-packed levels
- An immersive combination of puzzle, platform and adventure elements
- Employ an arsenal packed with pistols, magnums, shotguns and uzis
- Battle wolves, bats, bears, alligators, raptors, and even a T-Rex in your quest for the Scion

# 2006
Only for certian IPAQ or Toshiba PPC models. Has a nasty copy protection scheme that allows only 1 install ever! 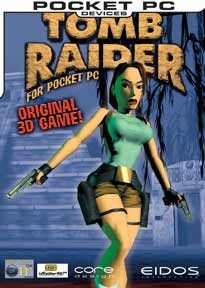