Now this game surprised me very positively. It is a mission tactical-strategy game which features hero and enemy characters with their own personalities, and a storyline. And this was before games from the Fire Emblem, Super Robot Wars or Front Mission series were on the market. Everything is still a bit rudimentary and not spectacularly presented, but it clearly shows a big step forward into story-based strategy tactic games which I can't remember to have seen so far on consoles up until then. The scenario with its conflict and mechas is quite similar to the original Gundam anime series. The difficulty level in general is fine, but I wonder why the - in my opinion - by far most difficult mission with very crucial timing and strong enemies was already so early in the game (mission 4 of 10), at a time when you had not yet a completely assembled team and experienced units. And after a while the battle animations become boring and repetitive. But luckily those can be turned off, which speeds up the game quite a bit. 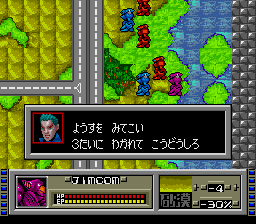