Deep in the bowels of a decommissioned missile base at Black Mesa, a team of scientists is hard at work on a top-secret government project. You are Gordon Freeman, a young anomalous materials researcher with a limited security clearance and no idea how dangerous your job and world is about to become... until you hear screaming. Next thing you know, hordes of monsters are pouring in through a rift in the fabric of reality as the space-time continuum shatters. And before you can say "anomalous materials," madness rules the world.

# 2013-08-13 05:03:34 - official description
After winning numerous PC game of the year awards, Half-Life is finally here on the PlayStation 2. In this first person shooter, you play a scientist named Gordon Freeman who works at a remote research facility that has just had a major accident. This is no typical shooter though; there are plenty of story elements and puzzles that need to be solved. With a great mix of character depth and action, Half-Life stands ready to be one of the premier shooters ever to be released on the PS2. 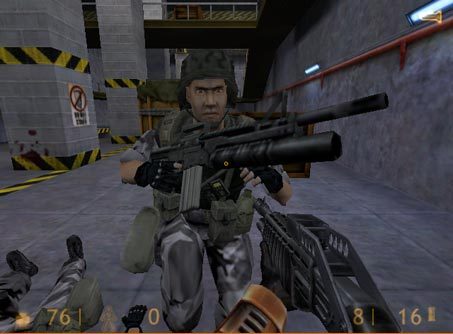