Contains three separate games based on the trilogy of Bruce Willis smash-hit vehicles. In the first you must rescue innocent hostages in a skyscraper that's wired to explode. In the second the hostages are on board circling planes as you fight to eliminate airport terrorists. And in the third your arena is all of New York City as you race the streets to find hidden bombs. Each adventure has it's own set of conditions with amazing depth and fully-rendered detail over thirty levels.

# 2014-08-19 03:56:25 - official description
This is the sequel to the hit Die Hard Trilogy where you will experience an all-new storyline featuring the heroics of John McClane and the criminal antics of international terrorists.
The sequel takes a bit of a turn, and instead of three themes in three separate styles of play (adventure/action, first-person shooting, and driving), the game involves one consistent storyline set solely in Las Vegas. You'll play as John McClane again, this time visiting his buddy Kenny Sinclair in Vegas when some localized terrorist activity requires his intervention! 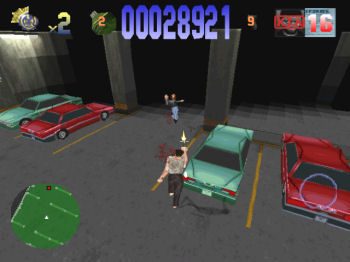