Conrad Hart thought he had escaped the Morphs. Unfortunately, they found him and put him in prison. As a stroke of luck, a human rebel springs Conrad from his cell and gives him a communicator and a pistol. Take control of Conrad as he travels through 13 levels of puzzles and gun fights. Can Conrad escape from the prison? Will Conrad ever be truly free from the Morph threat? Find the answers to these questions in FADE TO BLACK.

# 2013-10-23 16:35:19 - official description
Fade to Black is the sequel to Flashback The Quest for Identity. The year is 2190. As Conrad, the hero from the original game, you awaken from a long cryogenic sleep only to find the aliens you thought you had defeated 50 years ago now threaten to enslave the human race.
Now it's up to you to stop the aliens and become a hero once again.

Unlike in the DOS version, everything uses textured polygons. DOS version had characters and such as untextured (flat) with optional gouraud shading.

port of
Fade to Black (MS-DOS)

sequel of
Flashback: The Quest for Identity (SNES) 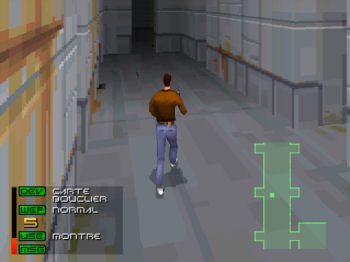