Star Trek - The Next Generation: A Final Unity

At last, a well-executed game based on the popular tv show follow-up to the original Star Trek show. The game doesn't waste any time: five minutes into gameplay, the player is confronted with a violation of Federation space, a group of alien defectors requesting political asylum, and a very large and pissed-off Romulan pursuit ship. This title's decent writing and Patrick Stewart's thespian baritone is excellent. In fact, the voice talent of the entire cast is here. Further, almost every aspect of the game: save-screens, astrogation, tactical combat, even the design of the manual is presented in a very attractive, straight-faced style consistent with nice Star Fleet Aesthetics. Players less interested in starship operations and more excited by living the lives of their favorite Star Trek characters may 'delegate' technical operations such as combat and power routing to crew members if they wish, but the hard-core, armchair starship commander can take full control - a very nice arrangement. In fact, if the game has a notable flaw, it may be that options are sometimes a little too open, and the player's range of choices a little too broad. Overall, this game offers an excellent extension of the feel of the show, and a solid game design as well. For its time, the production values are top notch. The film clips are impressive, and a "Holodeck" feature in the game allows you to watch cut scenes again and again to your heart's content. The graphics are well drawn, and all the main characters in ST:TNG are rendered in almost perfect fidelity with their real life counterparts. The voice acting stands out as one of the best voice tracks ever added to computer games. Ironically, the only real problem is that there is sometimes so much details in the background shots that, on occasions, it is difficult to pick out the hotspots. 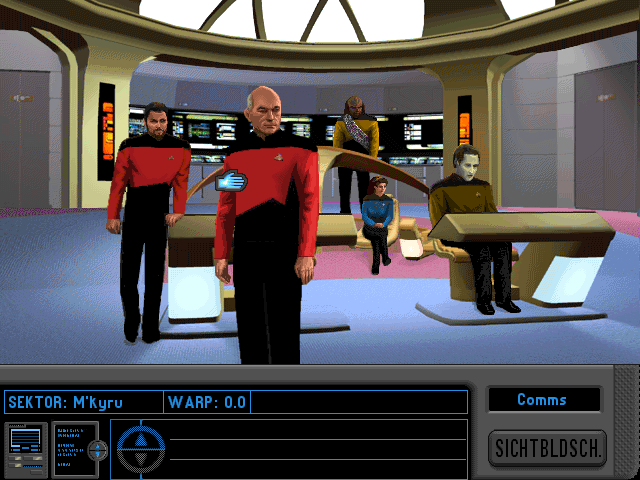 Star Trek - The Next Generation: A Final Unity in-game screen.