a.k.a. The Big Pro Wrestling!

One of the first wrestling games. Includes a large selection of attacks (for 1984). The controls leave something to be desired (grab your opponent, use one button to scroll through your list of attacks, and press the other to perform it) and the computer tends to cheat. Still, it's highly addicting. The voice of the referee was later reused in Exciting Hour/Mat Mania.

(Jacquismo) - # 2006
I remember this game when I was stationed in Norfolk... True that it might be simplistic and outdated by today's standards -- but it had numerous moves that were easily performed and very gratifying to watch... it even had your protagonist interruptions by others running up through the crowds

I dare anyone to play this game and not find it addicting
{that is, if you can find the original arcade version} 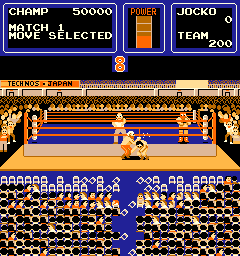