The control panel consists of one or two player select buttons, a joystick with fire buttons and one rotary dial for rotating the ship. The players ship is moved vertically, horizontally or diagonally by the joystick. The ship can be rotated 360 degrees by the rotary dial. The fire buttons are located on the joystick, two on the front and one as a trigger style

APPROACHING PLANETS
These planets first appear far in another galaxy and rapidly approach the players ship. They do not have moons orbiting around them. The player is awarded 100 points for destroying an
Approaching Planet.

ORBITING MOON
These are moons that are in orbit around the Attacking Planet. Destroying an Orbiting Moon awards 10 points.

MAD PLANET
Commencing with the destruction of all of the Orbiting Moons, an Attacking Planet transposes into a Mad Planet A Mad Planet must be destroyed quickly as its vengeful quest to destroy the ship causes its movement to quicken rapidly Mad Planets score 200, 300 or 500 points, dependent on its size.

COMETS
Comets first appear in the beginning of the third round and continue throughout the game. They travel indiscriminately around the planets and are deadly to the players ship. It must be avoided or destroyed. The first Comet destroyed awards 100 points. Every Comet destroyed in succession increments its value by 100 points up to 1000 points awarded for the tenth and all following Comets. However, if a Comet is allowed to leave the screen at any time during the round, the Comet values start over at 100 points and repeat the scoring sequence. This scoring sequence repeats at the beginning of each new round.

HUMANS
Humans first appear in the first Bonus Period (see BONUS PERIOD) and all subsequent rounds thereafter. Humans are picked up by the players ship by touching them with the ship. Points awarded for picking up Humans advances for each wave of game play. Starting with the second wave, Humans award 300 points each. This increments by 100 points for each subsequent wave to a maximum of 1000 points per Human in the ninth wave and remains at 1000 points for the remainder of the game. During a Bonus Period, all Humans score 200 points

BONUS PERIOD
A Bonus Period is achieved at the end of each wave (see ROUND PROGRESSION). During the Bonus Period only the players ship, Humans and Comets appear on the screen. The Player must pick up Humans to gain bonus points and avoid being hit by the Comet. The period ends when either the players ship is destroyed by a Comet, the Comet is allowed to leave the screen or ten Comets have been
destroyed. Each Comet appearing (up to ten) must be destroyed for the Bonus Period to continue Comets score 100 points for the first one destroyed and increment by 100 points for each
subsequent Comet that is eliminated. All Humans score 200 points during the Bonus Period.

GAME PLAY
Game play is initiated when either the one player or two player buttons are pressed. As the round begins, Approaching Planets from a distant galaxy begin to approach the players ship. The player has the option of destroying the planets as they are approaching him. Successfully destroying all Approaching Planets in a round awards bonus points for a Perfect Round. When a planet is
allowed to reach the players ships orbit, it reveals a group of moons orbiting around it. This becomes an Attacking Planet An Attacking Planet cannot be destroyed until the player has destroyed all of its Orbiting Moons. Once all of the Orbiting Moons game been destroyed, the planet transposes into the Mad Planet destine to destroy the players ship. The Mad Planet must be destroyed quickly as it travels faster and faster the longer it remains in orbit. Each round has a predetermined number of planets per round and a predetermined number of Attacking Planets to fight at one time see ROUND PROGRESSIONS). Once an Attacking Planet is destroyed, another planet approaches. If not destroyed, it also will become an Attacking Planet. This cycle continues until there are no longer any planets to destroy in that round. Once all the planets have been destroyed, the game advances to the next round.
In defense to the players attack, the Attacking Planet will release one of its Orbiting Moons into space in an attempt to destroy the players ship. This orange moon must be avoided or destroyed. If the Mad Moon is allowed to leave the screen without being destroyed, it is replaced in its original orbit around the Attacking Planet that released it.
The Bonus Period appears at the end of each wave. During this time, the player must pick up Humans while trying to destroy as many Comets as possible. The period ends when either the
players ship is destroyed by a Comet, the Comet is allowed to leave the screen or ten Comets have been destroyed 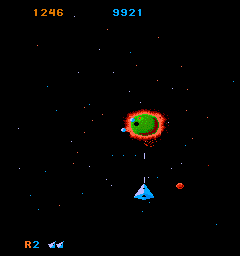