Once upon a time a horrible monster came without warning upon an unsuspecting land and decimated everything in its path. The paradise land of Alurea was hit hard. It's people, having known peace for 1000 years, had forgotten the savagery of battle and the land was destroyed. Only the King's twin infant sons survived. Fifteen years later... The elder of the twins, the successor to the throne of Alurea, is preparing to set out on a quest for a legendary stone called "Dragon Blue Eyes". Legend says that if ever the kingdom is in trouble, "The Dragon Blue Eyes" will set all things right. The younger of the twins, brought up by Princess Nana, wishes to join his brother and take revenge for their parents' death. 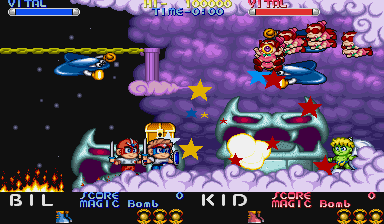