You play Mervyn, a sorcerer's apprentice who, while trying to make himself incredibly attractive accidentally turned himself into a frog! As it happens this wasn't such a bad thing though as shortly after this bit of magical fumbling the castle was invaded by evil wizards and warlocks who, believing our hero to be a simple frog, decided not to blast him into oblivion.
Your goal is to rid the castle of the wizards and warlocks, and you do this by defeating them in ritual combat. More on this a bit later...
The castle was thrown into darkness after the invasion, you start at the top of the castle and have to make your way through it defeating wizards/warlocks until they are all gone. They have also set up generators throughout the castle which create nasties that need to be fought through (like Gauntlet), but blasting these (fun though it is) is not the main purpose of the game, rather they are a hinderance to your goal. As you enter a room it is flooded with light, so you never know what is lurking just beyond the next door. All the nasties (including the wizards/warlocks) roam freely about the castle so you can be attacked from any direction.
To help you out though, there are floor glyphs - these come in 4 types. Blast, Travel, Map and Magic.

Standing on a Blast glyph and activating it creates a blast that should kill off the nasties in the room - note these are not always effective depending on the strength of the opposition.

Standing on a Travel glyph and activating it allows you to travel from floor to floor within the castle, note you cannot always return the way you came.

Standing on a Map glyph and activating it brings up a map of all the rooms you have explored on the floor you are on.

Standing on a Magic glyph and activating it allows you to use discarded runes from defeated wizards/warlocks to cast more powerful spells - you have 4 types of spell:

Effect - holding fire will activate the effect spell, normally a blast of energy to clear rooms, but there are other types that can reveal secret doors and show the locations of the wizards/warlocks on the map.

Power - This is key, you MUST have a power spell to run all the others, the higher the better. Your power spell is damaged by nasties, if you lose it you will be mortal until you can cast another one, if you die whilst mortal it is game over.

Defence - Again, pretty important - this prevents damage to your power spell by nasties.

Offence - The stronger the offence spell the more devastating your firepower.
Important, you should try to keep your spells balanced, a very strong offence spell for instance will drain a weak power spell quickly.

So, how do you collect runes? By defeating wizards/warlocks in Ritual Combat
Upon encountering a wizard or a warlock, jump on him to initiate the combat. The wizard/warlock will cast the runes to the word RANARAMA randomly and you have to put them back in the right order before the time runs out. If you do this then the wizard/warlock will dissapear with only his magical runes left. You need to collect these to progress further into the game.
So, gameplay boils down to the following:
Hop around the castle zapping nasties and generators and collecting power crystals regularly to top up you power spell. When you come across a wizard/warlock, jump on him and defeat him in ritual combat to get his runes, when they are released collect them quickly (they don't last long!) Now find a Magic glyph and use the runes to upgrade your spells to make you a more formidable enemy. When the floor is cleared, find a Travel glyph and head down into the castle to the next one. There are 8 floors in the castle and at least 2 wings (you start in the dungeon of the Magic Mineons and then once done, you progress into the realm of Belos the Black, beyond this i don't know - to get this far is a good 4 or 5 hours play and there's no save game option (you can save snapshots in your emulator though).
This is a really frantic top down shoot-em-up with a good explore element and also a lot of strategy with casting spells and making good use of the runes you collect - a great game. 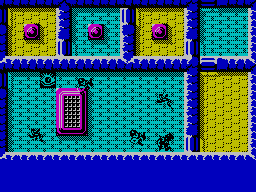