# 2014-08-26 17:58:46 - official description
A fighting game released in 1992 featuring eight characters, including Hanzo, Janne and Rasputin, modeled on historical figures from throughout the ages. The fighters compete against each other to become the world's toughest combatant, with players using a setup consisting of only three buttons (one each for punching, kicking and throwing). Adding to this unique system is the fact that the strength of your offensive blow depends on how long the button is pressed and held. Along with regular match styles, Death Match mode is also available and features mines, electrified ropes and other dangerous objects in the battle arena that can change conditions during the fight or damage players. Enjoy the wide range of combat forms as you take on history's best! 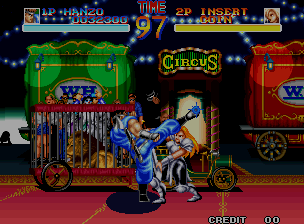