Compile's fabled puzzle game series hops to a new version early next year with changes not seen since the Sun Puyo was introduced on Saturn many moons ago. The colorful intro screen and game no longer stars the affable munchkin known as Arle Arja but an equally effervescent blond who wears a Puyo hat atop her golden locks makes her debut. Similar to Ms Arja's escapades, our heroine meets and competes against oddly appointed characters in games of Puyo Puyo to determine winner and pecking order.

Once the game begins, the familiar Puyos rain down in groups of two. The graphics are shinier than previous incarnations and each duo of Puyos bounce like buoyant jelly once they hit the ground. Sprightly sound effects also accompany the visual bounces for that immersive experience. On each player's gaming area, background graphics splash a little bit of color and substance to the visual simplicity. Puyo Puyo Fever adds an aptly named Fever Meter to the game which lies to the side of each gamer's window. It's made up of 7 circles which measure your Fever level and one fills up the Fever by setting up chain combos of at least 2 linked Puyo pops. Set off combos when the meter is full and shining like a beacon and you'll see a bunch of 3-D effects on your side of the screen as the Puyo stacks move around in a cinematic circus show. The camera will zoom in on the Puyos and show them being popped in 3-D isometric action. Linking a number of combos together will throw down a bunch of transparent Puyos on your opponent which blocks its own combo making capabilities. Create a mega-chain of at least 5 linked Puyo pops and you'll squash a big transparent Puyo on your opponent which takes up the space of four regular Puyos.

NCS anticipates time-consuming fun and tactics once Puyo Fever reaches market and we're already practicing on Puyo Puyo games of the recent past to hone our combo creation skills... 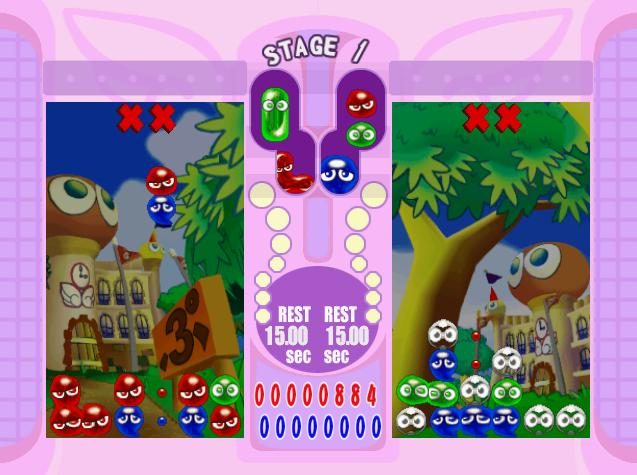