The first mission ties with the movies in that Kyle serves as the guy who fetches the Death Star plans so Luke (unmentioned in the game) can destroy it. The actual game starts from the events following it, however, as the Dark Trooper project gets into operational state. Rest of the game story is built around this project, uncovering information about it and sabotaging it.

Unlike most games of old and even modern, many of the missions in Dark Forces involve the player locating something and then returning to the start point where the vessel that brought Kyle in is ready to extract him again (or shortly arrives there!). There's also turrets going berserk, armor not providing perfect protection, shared ammo between two weapons (the other consumes more ammo), grenades having a charged throw (throws farther the longer you hold the fire key), actual 3D models (spacecraft and turrets), overpasses (near true 3D levels), sectioned maps within single level, a glow lamp with depleting batteries (instead of single use light "powerup"), and probably some other features that weren't seen in games around the time Dark Forces came out.

Sanguine # 2009-09-16 23:32:47
war - since the protagonist is a mercenary who is mostly hired for "covert" ops, this bit is not so evident, but these are part of the Rebel Alliance's war effort against the Empire.
depth fog - only used in some levels, especially some of the outside levels to simulate thick atmosphere (or dust?).
autosave points - on mission completion, no other saves are made. Player can freely replay any level they've finished.
voice overs - besides videos and taunts from the empire's minions, there's actually some voice overs besides them, such as Kyle reporting having found something pertinent to the mission and Jan giving farther instructions (albeit all of these are rather short compared to the voice overs in videos).

--- averted
absolutearmor - melee and some other attacks bypass the shields 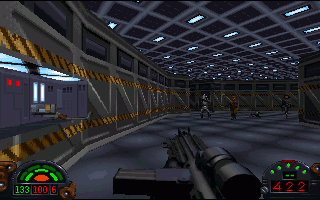