In this game you control Lum, a main character of the very popular "Urusei Yatsura" manga and anime series. The game starts in preschool with the character being a little child. The school is under fire and you have to make your way to the top of the building. After that the character grows older and the next level is elementary school and so on. The concept stays the same in every level until you are grown up and get the chance to marry. You can dispose enemies by shooting lightning bolts at them. It seems that Jaleco got the Urusei Yatsura license only for the Famicom version. The arcade version features different characters. And to be honest the license is a waste for such a simple and ultimately below average platform game. The game slows down, especially in later levels. Enemies are unfair, reappearing again and again, and mostly when you are timing jumps. The levels are all too similar and the graphics and music are nothing to marvel at.

Port of arcade Momoko 120% and renamed to match the brand. 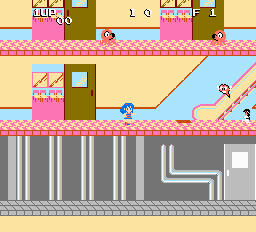