Two worlds exist, unaware of each other. Mana, or life force, is shared by both worlds and while one world thrives, the other suffers. Lloyd Irving lives on Sylvarant,a dying world where nothing is as it seems - a fact he hasn't yet realized. With a strong set of justice, incredible bravery, and a particular loyalty to his friends, he joins them in a very important quest: a journey to save their world. Lloyd's close friend,Colette Brunel, is the Chosen One, destined to save the dying world as a descendant of the Mana bloodline. At the age of 16, the weight of the world hangs on her shoulders. Genis Sage, the village intellectual, is a talented magician with a personality to die - or kill - for. Most likely, you'll grow to love him. Together, they set on this dangerous journey together - to unlock the seals of the world and bring the balance back to their dying town on Sylvarant. In a dying village on Sylvarant, legend has it that a Chosen One will one day appear from amongst the people and the land will be reborn. Enter a world of beautiful cel-shaded graphics and high-quality anime cut scenes by renowned artist Kosuke Fujishima. Command real time battles in a unique 3D battle system that gives you full control over the characters. Execute and combine hundreds of special attacks and magic spells. The line between good and evil blurs in this immersive, emotionally charged epic adventure where the fate of two interlocked worlds hangs in the balance.
* Real Time 3D Battle System: One of the fiercest, most action packed battle systems ever created with hundreds of special attacks, spells, and combos.
* An Epic Adventure: Over 80 hours of gameplay in this epic, emotionally charged storyline.
* A 3D Masterpiece: Beautiful cel-shaded characters by renowned artist Kosuke Fujishima, author of manga and anime version of Oh! My Goddess.
* Adaptable Characters: Fully customizable character growth system to suit your fighting style where the storyline changes based on the characters' relationships.
* Unprecedented Variety: Dozens of mini-games and side quests.

ported to
Tales of Symphonia (PS2)

prequel of
Tales of Symphonia: Dawn of the New World (Wii) 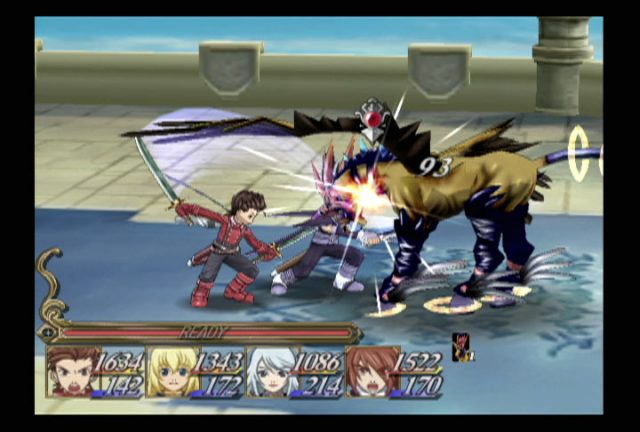