A good conversion of an old arcade game.

Become Dig Dug, the champion of love and justice, as you drill up, down, left and right, defeating any enemies in your path. Avoid the persistent Pooka and the deep-dwelling but whimsical Fygar as you defeat all the enemies in order to clear each stage. Defeat enemies by hitting them with the harpoon and pumping air into them, or by dropping rocks on them from above. Receive bonus points by getting the vegetables that appear in the middle of the stage. Receive high points for defeating deep-dwelling enemies or by defeating Fygars from the side with the harpoon. Pass through inflated enemies or defeat enemies in an adjacent passage for an even higher score. Lure multiple enemies and defeat them with a single rock from above in this thrilling action game. 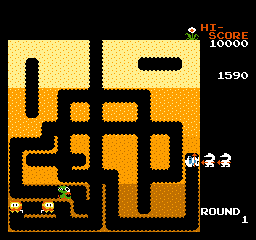