The first Metroid ever and in Japan only released for the Famicom Disk System. Lead Samus Aran, a skilled bounty hunter, to fight against the space pirates and their leader, Mother Brain. The game is considered one of the milestones in the Famicom game library, but I think it has its issues, making this not quite as playable as lets say Super Mario Bros.. Most annoying thing is the knockback when you are hit by enemies, often resulting in falling down into lava or taking more hits. The game is rather difficult. Many secret rooms, non-linearity and a good presentation make this an overall good and interesting game though. The music and graphics fit the game and are nice for its time. The Famicom Disk Version is actually a little bit better than the Western NES catridge version due to the extra sound channel and the fact that you could save your game on disk instead of a password system. 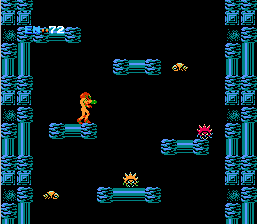