The Japanese Super Mario Bros. 2 is very similar to its predecessor. Besides some marginal graphical changes and the fact that Luigi controls a bit differently (higher jumps, but less control) there is nothing real new in this game. I guess the reason why it never made its way to the US or Europe (at least on the NES) is the overly high difficulty level which somehow reduced my interest from rescuing the princess from yet another castle.

Originally released in Japan as Super Mario Bros. 2, this game has previously made only brief cameo appearances in the Western Hemisphere. Now available on the Virtual Console in all of its original splendor, Mario fans will appreciate the familiar look and feel of the game, while finding that its updated game play creates an entirely new challenge. No longer content just to wear different-colored overalls, Mario and Luigi also possess different skill sets: Mario can stop quicker, while Luigi can jump higher. In addition to the classic enemies already known to fans worldwide, there are also Poison Mushrooms, backward Warp Zones, and the occasional wind gust (which can help or hinder your progress) to take into account. And if that's somehow not enough, expert players can go looking for the game's secret worlds. So get ready to put your Mario skills to the ultimate test, and save the Princess again. Just don't be surprised if she's in another castle. 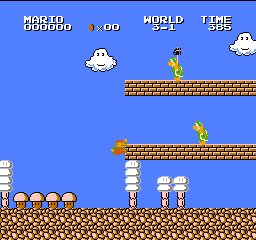