Half-Life2: Game of the Year Edition was also published in Israel. While the packaging is in English, the manual and game itself are in Hebrew

From the official site:
By taking the suspense, challenge and visceral charge of the original, and adding startling new realism and responsiveness, Half-Life 2 opens the door to a world where the player's presence affects everything around him, from the physical environment to the behaviors -- even the emotions -- of both friends and enemies.

The player again picks up the crowbar of research scientist Gordon Freeman, who finds himself on an alien-infested Earth being picked to the bone, its resources depleted, its populace dwindling. Freeman is thrust into the unenviable role of rescuing the world from the wrong he unleashed back at Black Mesa. And a lot of people -- people he cares about -- are counting on him.

It's commonly pointed out by various people (also by the Concerned HL2 comic) that you can't sprint when your flashlight runs out of power and this doesn't make sense (to them). However, they fail to realize a simple fact: default movement mode is already running (this is fairly obvious, which makes me wonder how people manage to miss it). The thing they think is running is literally sprinting largely accomplished by the aid of the HEV suit (a type of utility power armor) Gordon is wearing. So the sprint expends the same suit energy your flashlight uses. However there is obvious discrepancy in the amount of energy used.

prequel of
Half-Life 2: Episode One (Windows) 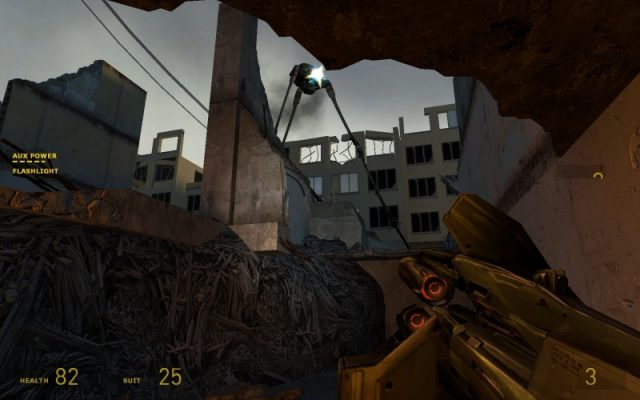