AKI once again teams up with Bandai to flex their combined Ultimate Muscles with the fastest and most inter-galactic wrestling game around. Designed by the team behind Def Jam Vendetta, Galactic Wrestling: Featuring Ultimate Muscle features exciting head-to-head wrestling action for one to four players, with more than 45 characters –- each with unique moves. Complete levels to unlock bonus characters and slam your way through seven different rings and six different game modes including Tag Team, 5 vs. 5 group, and Battle Royal for an all-out wrestling free for all. Multi-tap required for four-player simultaneous gameplay. 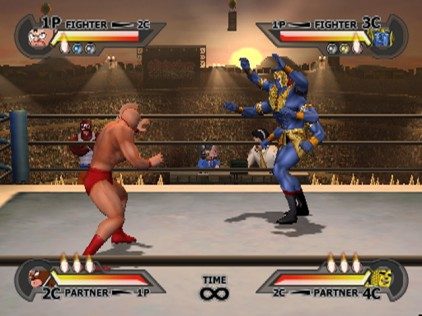