The first F1 racing game
(Note by Teran: Well this isn't really a Formula 1 game, but it is surely the first game which made you believe you are actually driving (cf Night Driver [Flying_Arsedoctor]). Great graphics for its time.)

By Flying_Arsedoctor: Very reminiscent of Super Hang-On, yet predates it by several years! The beefy processor combination assisted the 'next-generation' quality of this game. Interestingly, the year of this games release was one of the most exciting ever in F1 racing, and the height of the ground effects era, which may explain why the cars handle so smoothly!

The first F1 race on the real Fuji Speedway was in 1976. After a 1977 F1 crash, there were no F1 races for 10 years. Since the first version of Pole Position was published in 1982, this game could only take place the seventies. 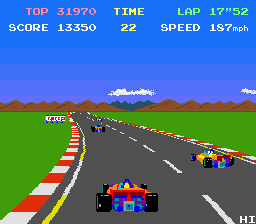