Darkwatch: Curse of the West

The story of Darkwatch is quite simple and easy to understand. You are Jericho Cross, an outlaw, in the year 1874. You're in the middle of the Rob a train when you come across some undead skeletons. They fight their way through the train with nothing but a revolver, until you finally reach the last car.
A woman tries to stop them, but they blow it anyway. But instead of finding gold, a tall, inhuman man appears with bright red eyes out, he immediately grabs her and knocks her out.
They wake up to the woman, she explains that she is turning into a vampire, and the only way to get rid of the curse, the thing is to kill.
She brings you back to Darkwatch, you might call it, an Anti-evil organization. Though, things go haywire, do your dismay...

# 2020-05-04 11:02:07 - official description
Darkwatch: Curse of the West blends vampire horror with western genres. Darkwatch is a secret strike-force that has a protected man from evil since the dawn of civilization. You play its newest and deadliest agent, Jericho Cross, an outlaw gunslinger hunting the vampire that bit him. Blast your way through an American frontier overrun by the undead using your arsenal of powerful assault vehicles, enhanced versions of Western weapons, supernatural vampire abilities, and your trusty undead horse. In this frightening version of the Wild West, you're never safe.

version of
Darkwatch: Curse of the West (PS2) 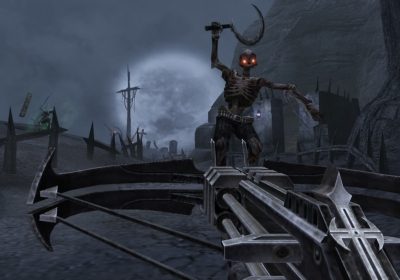