The alien Red Falcon is back, and planning on taking over the planet Earth. Now it's up to Scorpion and Mad Dog to battle through five levels and save the planet. SUPER C is the sequel to Contra where game play is a combination of side scrolling/platform and top down view. There are a wide variety of enemies to defeat, starting with earthly locations, and progressing to more alien ones.

# 2013-10-07 14:51:17 - official description
In this action-packed sequel to the popular Contra, players have little time to think. Experience run-and-gun game play at its best as you take control of Mad Dog or Scorpion and once again battle the forces of Red Falcon. Stages feature a combination of perspectives (side scrolling, top down, etc.) and intense battles against huge bosses. Use a variety of powerful weapons and tap into your killer instinct to survive the deadly waves of enemies. And if you're scared, recruit a friend to help you. Because if your trigger finger lacks stamina, then Earth will lack a future! 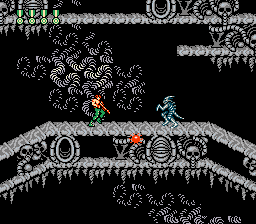