Mobile Suit Gundam: Climax U.C. is an action game set in the original Universal Century Gundam timeline. Players can experience events in Chronicle or Progress mode, or take any unlocked driver and MS in VS mode against a human opponent.
In Chronicle mode, players choose a series of Gundams to play. Initially only the protagonist of the series (i.e. Amuro Ray or Kamille Bidan) is playable, but by completing a series you unlock minor characters and antagonists as playable for events.
In Progress Mode the player plays Kamina Tachibana, a bishop of the Earth Federation or the Principality of Zeon whose military career begins during the attack on Jaburo. The player can select the personality of Kamina, the mech he pilots during a mission and how to distribute his skill points after a mission.
If you perform a mission well and use weaker mobile suits, Kamina will get more skill points to distribute, and piloting specific mechs unlocks the ability to acquire specific active skills.
Kamina's stages cover the entire time span of the universal century, including her retreat during the 30 years of peace after Char's counterattack and the new conflict during Gundam F91. Up to 12 custom Kama can be saved for VS mode or Free Battle Extra mode. 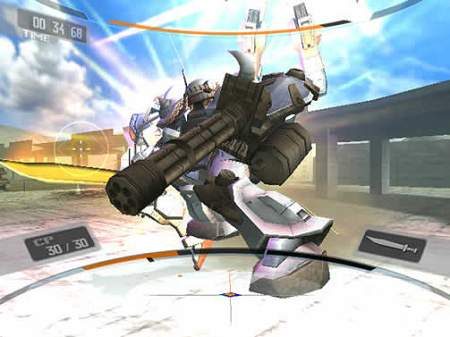