This game was one of the two launch games for the PC-Engine CD-ROM system. Though it can hardly be called a game. You are in the role of a fanboy of a Japanese singer named Noriko Ogawa and visit one of her concerts. After the concert her manager gives you the opportunity to spend one day with her. You have the choice between a few activities (e.g. shopping or going to a disco), then you go to her home and play some mini-games like Jankenpon (Scissors-Paper-Stone) or a quiz about her life. Then she says 'Thanks and Goodbye'. That is all. There is no real goal in this game (at least I didn't found one) and it's very short. 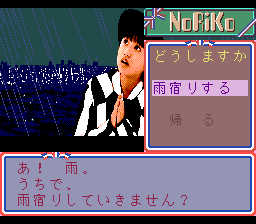