An artillery game variant with 10 types of vehicles (tanks), many environmental factors, many defensive options, up to 10 computers and/or human players, and a massive number of types and variants of offensive weapons and items. Players earn currency by kill count to buy these gidgemits and gazmoes. The arms dealer has limited supply and uses a persistent economy (both optional). Players can sell anything back to the dealer, possibly to make a profit. Players earn interest on their capitol based the economy.

The environment can be annoying and hostile to all players. Gravity, wind, lightning strikes, earthquakes, landslides, even meteorites.

Two plain text files in the game's directory contain taunts and dying words. Users can translate or edit these files as they like. The economy and most other options can also be tweaked in this way.

Players take turns moving, activating defenses, tweaking vehicle options, and/or selecting a weapon/attack. Amongst the multitude of possibilities. Weapons are launched at a chosen speed and angle like most artillery games. Strategy is usually simple in artillery games. But all the additional gameplay elements here can interact in many, many ways so that strategy is a major element. Players can direct their vehicles to drive over or fall on top of others, to cause damage to both. The idea being the player causes more damage to their opponent than themselves, but this requires just the right terrain and conditions to favor the attacker. Damage can be caused to the pixel terrain for this and other purposes. Players can attempt to bury each other or themselves. Terrain protects but also limits attack options and even some defense options. Among defense options are several types of shields. Some are a force field that causes weapons to detonate. Others are 'soft' and absorb a percentage of damage. Another type is reflective so that a weapon bounces elsewhere, hopefully into another player or even back at the shooter. All these have pros, cons, and Achilles heals. The better a shield is, the worse it is for the defender if an opponent manages to fire [I] from inside [/I]. Another example, in the right conditions, a skillful shot can be fired so it skips across the bouncy shields of several opponents, depleting energy from all of them. Also, if the wind is right, a skilful bounced shot falls right back on the same opponent multiple times until the opponent's energy is entirely depleted. Everything except regular angle and speed attacks takes energy, especially defenses. Moving and some special weapons also take energy.

An alternative mode allows each player to merely plan their turn. When all players are finished, their orders are executed simultaneously.

Yet another play mode (in v1.5) isn't turn based. Up to 10 players play simultaneously. This is where Gravis Gamepad compatibility really helps. Any extra players beyond 4, for Gravis Gamepad, or 2 for PC joysticks, must share the keyboard.

To begin, the number and type of players are chosen. Options are set. Any of the extra options can be disabled so that even and ordinary artillery game with only one type of tank and infiweapon are used. The number of rounds is set. Each round ends when one player or none is left alive. Currency earned is then used to buy (and/or sell) weapons, defenses, and accessories. A new round begins until last round ends. Players are then shown their rank.

Later versions were written in Borland C++ and Turbo Assembler (author implied in documentation that free tools were used previously). Versions before 1.0 were freeware and lacked most of the features of the shareware version. Shareware versions had many featured removed that were available in the registered versions. Many revisions followed, up until the final 1.5. v1.5 was mostly nagware, having all features of the registered version except for the tri-turret tank. The registered version does come with a deluxe bound manual edition of the HTML documentation. The network/modem play was planned but never implemented.

There are way to many things to list here.

The "Mother of All Games." Check here to download (don't worry it's shareware)  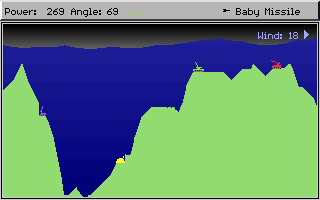