The game that would eventually become the western version of Super Mario Bros. 2. You can feel by the controls that this game is from the same developers as the original Super Mario Bros.. It has many fresh ideas, looks and sounds good and is an overall very enjoyable platform game. Besides some minor cosmetic changes there are two significant differences compared to the Mario 2 cartridge version. First, you have to complete the game with all four characters in order to finish it, which is kinda silly. But second, you can save your progress after each world which makes up for it. 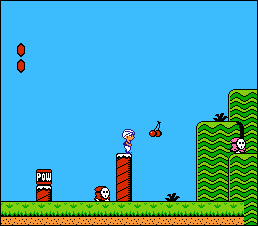