In Valkyrie no Bouken Namco mixed the fighting of The Legend of Zelda with the scrolling overworld of Dragon Quest. The game features many other aspects of RPGs of its time, like shops or dungeons and magical abilities. At its time the game was quite successful and Japanese players liked it, but nowadays you immediately recognize several issues that make this game actually far less playable than both of the before mentioned games. The inventory is limited to only eight items. Later in the game it is nearly impossible to stack a couple of needed extra potions to survive the harder dungeons. Resting in an inn is too expensive. It costs nearly all your money to just fill up your hitpoints. Enemies often approach the player in unfair ways. There are no NPCs in the game and thus there are no hints to the very few but also very nasty puzzles. At least in that way non-Japanese players are not in a disadvantage here. Graphics and sound are merely average. 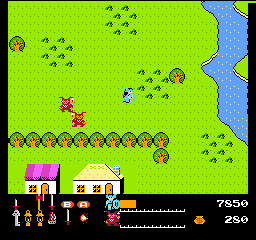