In "Hottaman no Chisoko Tanken" the goal is to reach the exit door of each level. The exit door appears after collecting all four keys hidden in the level. Controls and gameplay are similar to Dig Dug, the levels are much bigger though with more elements, like collecting and placing bombs to reach treasure/keys. Teleporter fields can be used to teleport yourself to different locations. However the teleporters destination is random, you could possibly land at every teleporter in the level. Also, killed enemies reappear very fast at the very same location where you have killed them. All this, amongst the not so good graphics and music, make this game rather unattractive for action gamers and too much based on randomness for puzzle gamers. The game only features about 15 levels, eventually starting over at level 1. Not very much content when you compare it with similar games of its time. 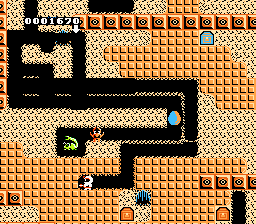